For the last 10 years the summer’s highlight for any Western Michigan car lover has been the 28th Street Metro Cruise. Held each year in late August, the Metro Cruise mimics Detroit’s Woodward Dream Cruise for the car faithful of Western Michigan. Beginning with a not-so-humble 85,000 attendees in 2005 it has now grown to exceed 250,000 people and 15,000 cars.

The cornerstone of the Metro Cruise are the dealership car shows where each of the 28th Street auto dealers welcomes classics of all years from their particular brand of car. The largest of these dealer shows is the renowned Berger Chevrolet Show, jointly sponsored by Berger and the Western Michigan Camaro Club. Restricted in prior years to just Chevrolet and Chevrolet-Powered vehicles, the team has thrown open the doors this year and is inviting all GM branded vehicles to come and be a part of their show.

The main show will be held on Saturday, August 22nd this year with show hours running from 8am until 2pm. It is not unusual for the first show participants to arrive literally by dawn’s early light to secure a prime parking position.

Not so well known is Friday night’s Meet and Greet. This event allows show participants to catch up with old friends under the more informal conditions of Friday night. That event runs from 7pm to 10pm and is better attended every year.

It’s important to note that this is Berger’s 90th Anniversary. Began in 1925 by William Berger, the dealership has been managed by four generations of the Berger family and is still in the family’s hands today. Berger is the only surviving Chevrolet muscle car dealer from the first golden age of high-performance.

No party would be complete without a couple of special guests and Berger has those coming as well. The 1969 Dick Arons NHRA Camaro racer heads the list. Originally campaigned by Dick with sponsorship from Berger, it has now been restored to its original showroom condition and is returning to its roots from Tennessee. Jeff Strickland from Alabama is bringing a little newer Camaro. It’s his 2015 GMPartsNow.com COPO Camaro. Jeff was the NHRA Division 2 Champion last year as well as finishing in the prestigious Top Ten nationally in NHRA Stock Eliminator competition.

Also returning for this year’s show is Jim Luikens, Berger’s well-known High-Performance Parts Manager from back in the day. Jim is looking forward to catching up with lots of his old Berger customers and reminiscing about days gone by.

The Berger All-GM Show is open to the public, is held rain or shine, and is entirely free for spectators. There is a entry-fee of $15.00 per car to those who would like to show off their GM vehicle during the event. The entry fee includes one free t-shirt and a dash plaque to the first 200 entrants.

Berger is Growing to Serve You Better

If you want to see the newest automotive thing on 28th Street just cruise by 2525 28th St SE and look to the east. There you’ll see the latest enhancements to the Berger Chevrolet campus. Berger was one of the original automotive pioneers on 28th Street in 1965 and since that time your automotive needs have increased significantly. Over the years Berger has kept pace with them by expanding again and again.

The summer of 2015 brings yet another expansion, this time one of their largest ever. To better serve their loyal customers this summer Berger will also be expanding their service operation.  When the project is complete they will have more quick-lube lanes and more service bays in addition to the much larger vehicle display area.

More than three acres of new retail display space are being added to accommodate their truck and SUV inventory. Currently their vehicle inventory is spread across their entire campus.  The additional new, paved area will make for easier shopping by vehicle category. Truck and SUV buyers are usually not interested in sedans and other smaller models while the same is true for sedan shoppers who have little interest in a new truck.

The demolition, excavation, and construction of the additional quick lube lanes and service bays will be ongoing during this project. The project promises to be noisy, dusty, and occasionally crowded due to limited space. Construction equipment will be numerous and active on site. Berger anticipates that the project will be completed by September 1 but are hoping to have it finished sooner.

Through the process they promise to provide the quality service you that you expect from Berger and they appreciate your patience and understanding during this temporary remodeling project. Please let them know if you are inconvenienced in any way during the project.

In the meantime enjoy the construction pictures or, better yet, cruise on over to 28th Street and see for yourself.

Cash for Junkers is Back at Berger

Cash for Junkers, the popular program offered by Berger Chevrolet of Grand Rapids, Michigan, is back but only for a short time. Through the end of June 2015, Berger will offer $3,500 in cash for your 1986 or newer car, truck, or van trade-in, towards the purchase of any new or pre-owned vehicle that they have for sale. Now you can Eighty-six your ’86 and drive in style this summer.

And you’re not getting just any new or newer vehicle, you’re getting a Berger vehicle. One that is offered for sale by the three-time, and consecutive, GM Dealer of the Year. Berger prides itself on offering the best customer experience so you can expect that every part of your transaction will be handled with dignity and respect.

Berger has what you need, no matter whether your automotive needs require a fuel-efficient Chevrolet or other popular car, a roomy Traverse or other functional SUV, or a sturdy Silverado or other pick-up. No matter what you’re searching for Berger offers a unique lineup of vehicles that deliver exceptional fuel economy, innovative technology, and impressive safety.

Chevrolet is the first and only car company to bring built-in 4G LTE Wi-Fi to cars, trucks, and crossovers. When your vehicle is running, you’ll have a more powerful connection than a smartphone or mobile hotspot. It’s a fast and reliable connection that doesn’t rely on your mobile device’s battery.

No matter what you’re currently driving Chevrolet offers a full lineup of fuel-efficient coupes, sedans, hatchbacks, trucks, and SUVs that are some of the safest and most technically advanced vehicles on the road today.

The 2015 Malibu, for example, offers an impressive EPA-estimated 36 MPG on the highway. Malibu is designed to help you save gas with stop/start technology that can automatically shut off the engine when the car is stopped. The engine then restarts seamlessly when the brake is released. It’s so smooth that you’ll barely notice the transition. That is just another way that Chevrolet delivers precise engineering at an affordable price.

Berger Chevrolet can be found on 28th St SE in Grand Rapids or on the web at www.bergerchevy.com. Call, click, or stop by soon to see how they can improve your motoring experience at an affordable price.

Berger Chevrolet, of Grand Rapids, is proud to be included in that elite group. For Berger it was their third Dealer of the Year award in the last three years. The award honors superlative performance in sales, service, and customer satisfaction.

“The Dealer of the Year program honors our dealer partners who have done an exceptional job toward our collective goal of earning customers for life,” said GM CEO Mary Barra. “We salute these outstanding dealers for all that they do for our customers, their communities, and our company.”

Dealers must also show a long-term commitment to retaining customers and providing them with exceptional service while using Genuine GM Parts.

To recognize and thank his employees who were responsible for earning their third consecutive award Matt Berger held a thank you luncheon at the dealership. Every employee was invited in order to thank them specifically for their particular contribution towards winning the award.

General Motors has presented its Dealer of the Year award since 2000.

Berger Chevrolet has a long and noteworthy history in Motorsports. For years they’ve sponsored the best cars and the top drivers in NASCAR, the NHRA, and other premier forms of racing.

However, that all took a turn in a radically different direction recently when Berger sponsored a four-man team in the 24 Hours of Le Mons (lemons) race held at Gingerman Raceway near South Haven, Michigan.

Although the race is patterned after the prestigious 24 Hours of Le Mans the only racing similarity is in the name. Unlike every other form of Motorsports, the idea here is to spend as little money as possible while having as much fun as possible.

In fact, The 24 Hours of LeMons is restricted to cars that were purchased, fixed up, and track-prepped for a total of $500 or less. A BS-Factor judging panel will dock entrants one lap for every additional $10 they think you spent on your car. It’s also a claiming race, meaning the organizers can buy your car after the race for $500 if they think you’ve been cheating.

The racing consists of tech inspection and track testing on Friday; endurance-race sessions on Saturday and Sunday; and breaks for sleeping, eating, and nightly bandage application.

It’s kinda like a loud, hot, noisy version of driving to work. For a really, really long time. Without actually getting anywhere. Oh, and it’s a little more dangerous.

The organizers usually get more applications than they can handle at each track so they have to pick and choose entrants. Boring applications don’t count for much. Applications like “Choose us, because we’ll wear beaver costumes in the paddock and our car is entirely coated in birch bark” give those prospective drivers and teams much better odds of being accepted.

Does all this fun come without fame and financial reward? Absolutely not! The Albert Gore Jr. Carbon-Neutral Cup, and other such venerable honors, are awarded each season. Some teams even win cash awards, however the organizers love to pay those cash prizes in nickels. 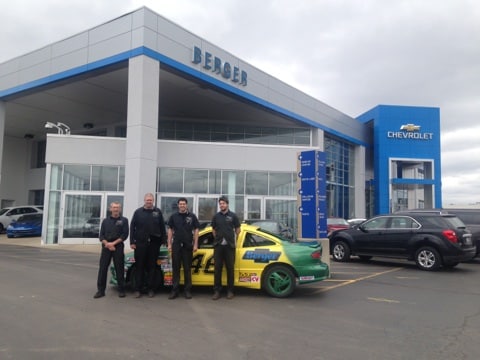 The team was driving a stock 1996 Chevrolet Cavalier that was freshly plucked from the back, back row of Berger’s Used Car Lot. To try and make the Cavalier look faster than it was, and maybe scare the competition, the car was given a “Days of Thunder” paint scheme.

Despite intensive preparation advice from Cole Trickle himself the car was knocked out after 14 Hours(!) of competition with a broken wheel bearing. For their effort the team placed a very respectable 10th in class and 25th overall. Unfortunately, they received no nickels for their efforts.

The race at Gingerman was just one of the 19 that is on the 24 Hours of Le Mons schedule this year. There’s plenty of time left this season for you to join in the fun. Go to 24hoursoflemons.com to learn more or to sign up.